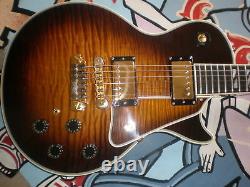 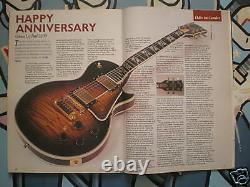 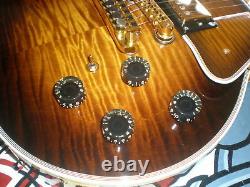 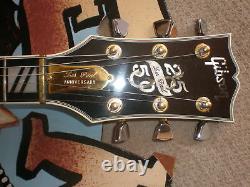 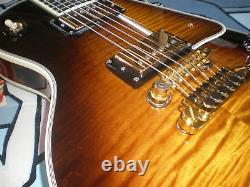 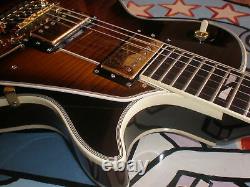 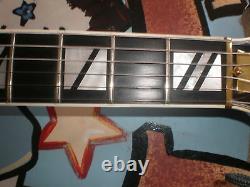 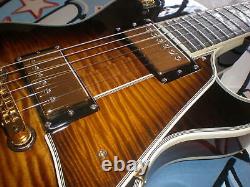 CONTACT DETAILS IN THE BUSINESS INFORMATION AT THE BOTTOM OF THE LISTING. Gibson Les Paul 25/50 one of only 100 Flame Tops.

Hand Made in 1978 by Gibson Kalamazoo. Here could well be one of the most important guitars Gibson ever made. It was to celebrate 25 years of The Les Paul Guitar and 50 years of Les Paul in the Music Business. These particular 25/50 guitars were offered to dealers at the trade show in 1978, and had to be ordered before they were Hand Made by Gibson Kalamazoo for us. Gibson was going to use the very last of their old original precious stock of Flame Maple, and they only had enough for 100 guitars.

Being a Gibson Main Dealer, I ordered the guitars at the trade show, and managed to sell one immediately on a forward order, but as they were going to be so special I ordered three. Neville wanted one of these and to his mind he chose the best one for himself, which was a birds eye maple one.

We got two of our three ordered guitars delivered, the two guitars looked great and it was hard to choose which one was better than the other when looked at them side by side. A few months later in the depth of winter, the third 25/50 that we ordered arrived on the back of a flat back truck. I was furious and wanted to send it back immediately, but all the staff said open it up and see what it's like, so I waited 4 days before we opened it to make sure it had acclimatised itself to the temperature in the shop, as it was so expensive we did not want to lacquer crack it subjecting it to extreme changes of temperature.

Gibson's packaging was incredible, as they virtually shrink wrapped guitars into the packaging. We are also a bit mad like that and very careful with guitars, to the point of being excessive, but it always pays off, and we are still the same. When we eventually opened the packaging we could not believe our eyes, this was the most amazing looking guitar we had ever seen.

I phoned Neville and he came down to the shop to have a look, as he had not seen this one, and agreed it was a stunner. I said it was still in stock and he asked if he could do an article on it for his Magazine. I took it to their office and they photographed it and then immortalised it in a double page spread in the magazine in October 1988. This magazine comes with the guitar.

The guitar was so special we decided not to sell it from our shop, but keep it as a long-term investment, so it is NEW OLD STOCK!! Where can you find any 1978 Gibson Les Paul in any shop anywhere in the world that has been in stock for 30 years unsold? I doubt that you would get the buckle from Gibson now though! The serial number is Kalamazoo Jan 1979. As said before there were only 100 of these special guitars made with the last of the Old Gibson Flame Maple they had at the time, even the Maple they used was by then, New But Old Stock! These guitars were so wanted that they decided to make them like normal Les Pauls at a cheaper price, in Black and Tobacco Sunburst, which were very popular, but nothing like this precious Flame Top. Neville Marten made a matching Flame scratch plate and bell truss rod cover to go with this guitar, and John Skelton of Escort Gun Leather and now T. Rextasy drummer, made a Flamed 4inch wide leather strap to match. The Flamed Scratch Plate is on the guitar and the Truss rod cover is pictured, all this goes with the guitar, and the original scratch plate is with the guitar as well. You may be wondering what the controls are!

The controls work the same way as normal Les Pauls but it has a coil tap switch in the circuit that works on both pickups at the same time. The pickups they used are Gibson L7 and in the coil tap position they are louder than a normal Les Paul Standard. All the internal channels are lined and boxed in to stop any interference, so if you take the control panel off you are then confronted with another metal cover to take off before you can get to the controls.

This guitar has virtually infinite sustain plugged into the right valve amp. The guitar has been kept wrapped in cotton, in a flight case to protect it, in a temperature-controlled environment all these years. If this sells it sells, if it remains with us for another 30 years then my family will get the benefit I suppose.

Extra pictures can be emailed on request. It will be parcelled up in a large and heavy flight case for protection. MORE INFORMATION ABOUT THIS 25/50 AND OTHERS, to answer some of your questions. We also have a photocopy parts list for this guitar from Gibson giving all the part numbers. We have found in our files a photocopy leaflet/Promo page for the original 100 hand made guitars that was given out to the dealers at the trade show 1978.

(Both of these go with the guitar). Les Paul's silver anniversary is your golden opportunity.

Fifty years ago Les Paul broke into the music business and began breaking it wide open with his echo chambers, overdubs and hit records. Twenty-Five years ago the Gibson Les Paul guitar began establishing its own records, becoming the world's greatest electric guitar. And today, both are still creating Grammy award winning music. Gibson is honouring its twenty-five year association with Les Paul by introducing the 25. It's the kind of guitar they'll be talking about 25 years from now.

But you have to order it by 31. December 1978, because it's a limited edition model. In fact, each guitar will be serialized to make it a one-of-a-kind collectors item.

Anniversary Les Paul looks like a work of art. Its solid mahogany body has a beautiful maple top-two piece, book matched and highly figured. For the fastest calibration and perfect intonation, Gibson designed the exclusive new fine-tuning tailpiece. There's a lot more brilliant Les Paul Sustain because of the brass nut and the solid brass studs mounted under the tuneomatic bridge.

We've added more power too with Gibson's new high output Series VII pickups. And there's even more sounds thanks to the coil tap switch that lets you flip from humbucking to non-humbucking modes. It's simply the most Les Paul guitar ever. Invest in an anniversary present that'll mean more and more, year after year.

But you must order by December 31. It's your golden opportunity to play the most Les. Another quality product from Norlin. Lincolnwood, Illinois 60646, 51 Nantucket Blvd.

That's the end of the leaflet. CATALOGUE NUMBERS AND PRICES FOR ALL 25/50 1978/1979/1980. After the limited edition models Which were never listed in the price lists.

Prices are taken from original trade price lists, which we still have. The original 100 hand made 25-50's were approx 50% more expensive than this in 1978. By the 80's we were Gibson's. Biggest dealer, with three stores and 60,000 musicians on our mailing list.

We can't list all 60,000 customers but you get the idea. No offence if we missed your name off the list! But we might deliver it by our own van if possible. Outside UK mainland and rest of the world you will have to arrange your own carriage and have the guitar collected by your own carrier.

It will be packaged up safely and ready for collection whenever is convenient for your carrier. This item is in the category "Musical Instruments & DJ Equipment\Guitars & Basses\Electric Guitars". The seller is "timgentlemusic" and is located in this country: GB. This item can be shipped to United Kingdom.